I'm not sure what Pester is actually a professor of. I don't know where he studied either. I do know he likes to make 'evil' plans, and he hangs around with a lot of Ruffians, so I don't really want to get close enough to ask him.

Professor Pester (ペスター教授 Pesutā Kyōju) is the leader of the Ruffians. He is the main antagonist of all the games and the television series. He is a nasty piece of work whose jealousy goes unchecked until he strides into the garden at random, employs all the same techniques as his Ruffian underlings, and carries a large rod with one purpose in mind: breaking your most expensive Piñata. He can be bribed to not destroy a piñata and instead leave, but if no one pays him 500 Chocolate Coins quickly enough he will lock on to a piñata and he cannot be stopped if he has already locked on.

How to stop Professor Pester

There are multiple ways to prevent him from breaking a piñata.

He was originally named Lester, and used to help Jardiniero with his garden. To do this he usually took sharp corner shortcuts to get the garden how he wanted it to be, such as creating black and red candy to feed the piñatas.

However, when Stardos was born he impressed his father by how well he tended the garden, and disallowed Lester from helping any further. Lester was annoyed by this and thought of an evil plan to ruin the garden.

Eventually, he sent Jardiniero after a legendary Dragonache tale. While he was away Lester took the time he was away to damage the garden. Lester then tempted Stardos with his sour candy, and invited him over to his new lair to try some out. Not long after they were gone, four enemy Ruffians appeared and attacked the gardens under Lester's orders, destroying nearly everything and kidnapping piñatas as well.

When Jardiniero came back he was shocked by the damage to the garden, and called Lester "Pester". From then on he was known as Professor Pester.

Professor Pester has the head of a ruffian, but the body of a human. He wears a graduate's hat and his clothing are dark and light red clothing, red slippers with black stripes, and a yellow belt. He has red, stripy tribal tattoos going down his chest and arms and bright green eyes. He is like a sour Human! 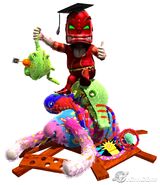 Add a photo to this gallery
Retrieved from "https://vivapinata.fandom.com/wiki/Professor_Pester?oldid=20471"
Community content is available under CC-BY-SA unless otherwise noted.