Here's a Piñata that just can't stop laughing. You can explain this by saying that it has a very positive outlook on life, but I suspect it's because the Pieena is one sandwich short of a picnic.

The Pieena is an orange hyena piñata. It is the evolved form of the Pretztail. After obtaining a Pieena via evolution, wild variants will begin to appear in the Dessert Desert.

We don't know what's so funny, but the Pieena always seems to be laughing its head off about something!

To see all media, see Pieena/Gallery. 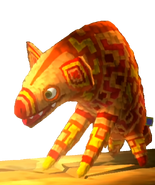 Add a photo to this gallery
Retrieved from "https://vivapinata.fandom.com/wiki/Pieena?oldid=21712"
Community content is available under CC-BY-SA unless otherwise noted.