The ground shakes as it moves, the trees quiver when it roars, its breath can scorch the earth. Truly incredible and utterly terrible, and all the more desirable for it.

None (this Piñata cannot romance)

It can be one of four colors, gold, brown, blue, or green, and it depends on which surface it is on when the egg was hatched. In Viva Piñata: Trouble in Paradise, there are six colors it can be, the remaining ones are white and yellow. Also, each Dragonache's appearance is different, with difference designs for teeth, mane, wings, and tail.

Finding a Dragonache (pronounced drae'gahn ahsh; rhymes with panache) egg is a matter of luck and patience!

The Dragonache variants are uniquely obtained, and there are far more than three variants as seen in most other species of piñatas. Each has its own color, style of teeth, mane, ridges, wings, and tail. The terrain where the egg hatches determines the color of Dragonache. The other features are completely random. It is estimated that there are over 20,000 Dragonache variants. 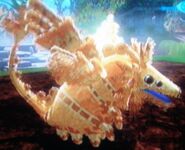 If hatched on soil or mud, you will get a brown Dragonache. 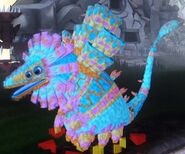 If hatched in water, you will get a blue Dragonache.

If hatched in grass or long grass, you will get a green Dragonache.

If hatched in sand, you will get a yellow and red Dragonache.

If hatched in snow, you will get a white Dragonache.

Each garden may have its own Dragonache, however, you will have to build a Mine and hire Diggerlings to unearth that garden's egg (or use a Candary wearing a Gas Mask for a 15% boost to your odds). In Pocket Paradise, there are no Diggerlings, and only the Candary can go into the mine. There is only one Dragonache egg per garden, and the egg cannot be broken, or crated.

The Dragonache is a very special piñata, and the focal point of the story in the first game. Its presence in your garden prevents any Sour from appearing regardless of the Tower of Sour, and it causes the screen to shake with each step.

It can be sent away at will by hovering the cursor over it and selecting the special "Dismiss" command. You’ll want to do this if you wish to attract Sours back, perhaps to convert them to regular piñatas. Another good reason is if the Dragonache take up too much space and is a nuisance (especially when trying to get what it needs to mature, the hardest part of which is the Dragumfly.) Once dismissed, you can recall the Dragonache for free through Gretchen Fetchem’s.

The Dragonache is completely invincible. That means no sickness, nothing can eat it, and you can’t beat the bejeezus out of it with your shovel and break it no matter what the shovel is made of (although it’s fun to try).

The only award a Dragonache can give a player is the Resident award.

An in-game rumor from Leafos claims that becoming a Master Romancer for the Dragumfly will make a Dragonache appear in your garden. (False)

Gretchen will only fetch a dismissed Dragonache back into the same garden that it was dismissed from. Also, she cannot be hired to hunt for additional Dragonaches in the wild.

Sometimes a Dragonache will lose fights despite being very strong. If it loses, it will cough up a joy sweet.

In the TV Series

Cliff Dragonache is a character born in the episode Bringing Up Cluckle. He hatched from a giant egg and his mother is Carol Cluckles. He is an orange Dragonache who was subject to verbal annoyance after his brothers found out he was not actually a Cluckles, but a Dragonache.

Can I have a Dragonache in each of my gardens?

Yes. Each garden can have its own Dragonache, but you'll need to find and hatch an egg in each garden. View thread

How do I make my Dragonache happy?

You can feed it Happy Candy or Joy Candy. If they are too sad to eat the Joy Candy, feed them a piece of Happy Candy first. A Dragonache's happiness is important, as a sad Dragonache will start fights with other pinatas!

Is there any point in keeping the Mine and Diggerling(s) once you have your Dragonache?

Diggerlings can still dig up gems, chocolate coins, dirt piles, diamonds, emeralds, giant seeds, gold flakes, gold nuggets, and sapphires from the Mine, even though you have obtained it. Otherwise, they serve no purpose.

Are the prizes earned from the Mine valuable?

Yes. Other players tend to buy gems and gold for a fairly good price. You can search the Trade over Xbox Live forum for Gems threads, if you have some gems or gold to sell.

My diggerlings haven't found a Dragonache egg yet. Any tips?

I'd say wait a little while longer and it should come, and if it doesn't then try firing them and hiring new ones. There is a moderate chance through each day that you can get the egg.

My Cluckles won't hatch an egg. What is going on?

Perhaps the Cluckles aren't happy. Try to lift their spirits with a Happy Candy and they should cooperate!

To see all pictures and videos about this topic, see Dragonache/Gallery.

Community content is available under CC-BY-SA unless otherwise noted.
Advertisement