Right from the beginning, scrambled, boiled, or fried; then there's the cute fluffy bit (ahhh); then we dive right back into roast, boiled or fried. How can there be any left? A Cluckles also knows how to hatch your fragile egg in next to no time.

The Cluckles is a red chicken piñata in Viva Piñata, most likely named after the candy Chuckles.

It has yellow, orange and green highlights. Its rear is the largest part of its body, and it is roughly bean shaped. Its short and thin beak is yellow. It has two small yellow feet. Its tail feathers are thin and yellow, with green tips.

N/A, cannot be obtained this way.

N/A, cannot be obtained this way. Trouble in Paradise: Have three corn in garden.

N/A, cannot be obtained this way. Trouble in Paradise: Has eaten 3 corn.

Have one corn in garden.

Have three corn in garden.

You should always have at least one Cluckles in the garden at all times. Ordering a Cluckles onto an egg will cause the egg to hatch immediately, which saves a ton of time for later species, and is the only way to hatch the elusive Dragonache egg. Also, a Cluckles with the Jurassic Hair accessory is required to hatch the Choclodocus egg, as it too can't hatch by itself.

The Cluckles is a domestic piñata. You can buy it for 1100 chocolate coins at Miss Petula's Paper Pets shop in the village once you are a level 8 gardener.

An in-game rumor from Leafos claims that when a Cluckles eats 5 different colored flowers it becomes a Parrybo. [False]

Directing a Cluckles to an egg (including a Dragonache egg) will make it hatch much faster than normal (earning the player an achievement).

In the TV Series

Carol Cluckle is a character in the Viva Piñata TV series. She is the mother of two Cluckles and Cliff Dragonache.

To see all media, see Cluckles/Gallery.

Three Cluckles plucking at the sand.

A Cluckles making a sound to mark the new day.

A baby Cluckles' head zoomed in.

A Piñatameter showing an animation of a Cluckles waking up. 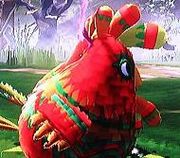 A Cluckles in Viva Piñata.

Add a photo to this gallery
Retrieved from "https://vivapinata.fandom.com/wiki/Cluckles?oldid=21995"
Community content is available under CC-BY-SA unless otherwise noted.